This year, take the path less travelled and check out some of these unique, off-beat cultural events from all over the world. From an art residency showcase in the Himalaya to a jazz festival in Switzerland, here is the Lounge guide to culture for the new year

Over the past decade, Berlin has become one of Europe’s major cultural capitals with a thriving arts and music scene and world-famous nightlife. But if that isn’t enough reason to put the city on your travel itinerary, then the centennial of the Bauhaus school of design—one of Germany’s most significant and influential cultural exports of the 20th century— should be enough to capture your interest. Founded in Weimar in 1919, before moving to Dessau and then Berlin before the Nazis shut it down in 1933, the Bauhaus school of design quickly became an incubator for modernist and avant garde ideas in art and architecture. For the centenary, there are festivities planned throughout the year, with exhibitions, events, tours, and the opening of three new Bauhaus museums. But the best time to go is in January, when the city hosts a one-week opening festival with performing arts, music and new media exhibits alongside interdisciplinary discussions with an international selection of artists.

For a detailed programme of the Bauhaus celebrations, visit Bauhaus100.com.

No London visit is complete without stopping by some of the city’s many museums, including the British Museum and the Tate Modern. If you’re there this spring, we suggest adding the Victoria & Albert museum to your itinerary. In February, the V&A will open a special exhibition on the work of French fashion designer Christian Dior, the largest and most comprehensive exhibition on the House of Dior ever staged in the UK. Spanning 1947 to the present day, it will trace the history and impact of one of the 20th century’s most influential couturiers, and the fashion house he founded. Whether you’re a haute couture expert or a fashion novice, this is one exhibition you don’t want to miss.

Derby is better known as a hub for advanced transport manufacturing than for its art or culture scene. But every two years, it gets taken over by the FORMAT photography festival. Directed by photography specialist Louise Fedotov-Clements and running since 2004, the festival is the culmination of a year-round programme of international commissions, open calls, residencies, and collaborations, and has a reputation for showcasing some of the most interesting and groundbreaking work by emerging photographers from all over the world. Past editions have tackled themes such as mass production, photocinema, and habitat and showed work by the likes of Ken Grant, Zhang Xiao and Mark Neville. For its 10th edition, FORMAT will feature works responding to its theme of “Forever//Now": the permanence of the photographic image contrasted with the ephemeral nature of reality in the current zeitgeist.

Primavera Sound is an annual celebration of independent music, held in Barcelona’s Parc del Fòrum. In 2019, it will feature musicians like Solange, Tame Impala, Dirty Projectors, Erykah Badu, Interpol, Deerhunter and a host of other leading lights from the indie scene. This year, the organizers will also unveil a new policy called The New Normal, promising a greater gender and genre diversity in programming.

Early-bird tickets are already on sale on Lineup.primaverasound.es.

Few international music festivals are as storied or eclectic or long as Montreux Jazz (as it is popularly known). It started in 1967 as a purist jazz festival, but since the early 1970s it has gradually opened its doors to rock, pop, funk, electronic and hip hop. Jazz, though, remains the cornerstone of the festival. One of the big draws of the 2019 edition (28 June-13 July) is Elton John, who will be playing on two nights as a part of his “Farewell Yellow Brick Road Tour". The full programme will be announced on 9 April.

In music circles, Mumbai’s National Centre for the Performing Arts (NCPA) is best known for being the home of the Symphony Orchestra of India. But the island city’s premier cultural institution organizes music performances across the spectrum, from jazz and electronica to Bollywood and Indian classical. One particular annual highlight is the three-day Bandish festival, held every August. Conceptualized as a tribute to India’s most legendary composers, Bandish sees some of the best Hindustani classical and Carnatic musicians in the country come together to perform and reinterpret classical compositions from different eras and traditions. Past editions have seen the likes of Shankar Mahadevan, Padma Talwalkar, Rashid Khan and Jayateerth Mevundi bring to life the works of Tansen, Bade Ghulam Ali Khan and Birju Maharaj.

Surrounded by rolling hills and paddy fields, the Ziro valley in Arunachal Pradesh is home to the Ziro Festival of Music, one of India’s most beloved outdoor music festivals. Founded by Bobby Hano and Anup Kutty in 2012, the festival showcases the best of Indian independent music, with a focus on artists from the North- East. Stages and stalls at the eco-friendly festival are almost completely made out of bamboo, with the latter manned by Apatani locals selling local food and the popular rice and millet beer. Dates for 2019 are not out yet. 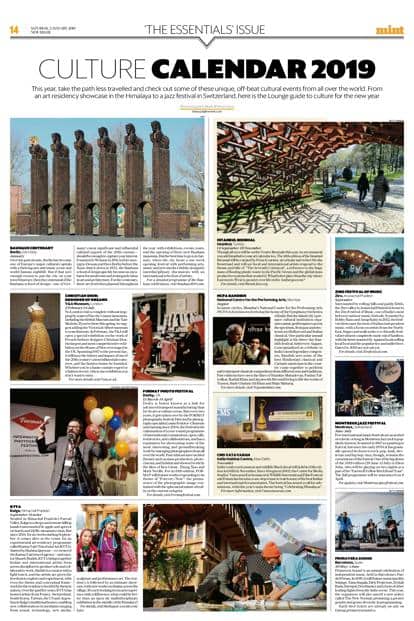 Nestled in Himachal Pradesh’s Parvati Valley, Kalga is a sleepy and remote hilltop hamlet surrounded by apple and apricot orchards and idyllic mountain vistas. But since 2014, for six weeks starting September, it comes alive as the venue for an experimental art residency programme called Karma Yatri Travel and Art (KYTA). Started by Hashim Qayoom— co-owner of the Karma Yatri travel agency—and curator Shazeb Shaikh, KYTA brings together Indian and international artists from across disciplines to produce solo and collaborative work. Shaikh is a curator with a light touch, and the artists are given the freedom to explore and experiment, with even the theme and conceptual framework for the residency decided by them in unison. Over the past five years, KYTA has hosted artists from France, Switzerland, South Korea, Taiwan, the US and Argentina in Kalga’s traditional homes, enabling new collaborations in mediums ranging from sound, technology, new media, sculpture and performance art. The residency is followed by an intimate showcase, with new works on display across the village. If you’re looking for an arts experience with a difference, what could be better than an open-air multidisciplinary exhibition in the middle of the Himalaya?

Though all eyes will be on the Venice Biennale this year, we recommend you add Istanbul to your art calendar too. The 16th edition of the Istanbul Biennial will be curated by French curator, art scholar and writer Nicolas Bourriaud and will see local and international artists respond to the theme and title of “The Seventh Continent", a reference to the huge mass of floating plastic waste in the Pacific Ocean and the global mass productive systems that created it. What better place than the city where East meets West to ponder over life in the Anthropocene?

India’s only environment and wildlife film festival will hold its 10th edition in Delhi in November. Since it began in 2002, the Centre for Media Studies’ Vatavaran Environment & Wildlife International Film Festival and Forum has become a one-stop venue to watch some of the best Indian and international documentaries. The festival has issued a call for submissions, with this year’s main theme being “Celebrating Himalayas".