The Typecraft Initiative is a first of its kind project, which creates a digital typeface from traditional crafts such as the Godna tattoos, Soof embroidery and Mithila paintings 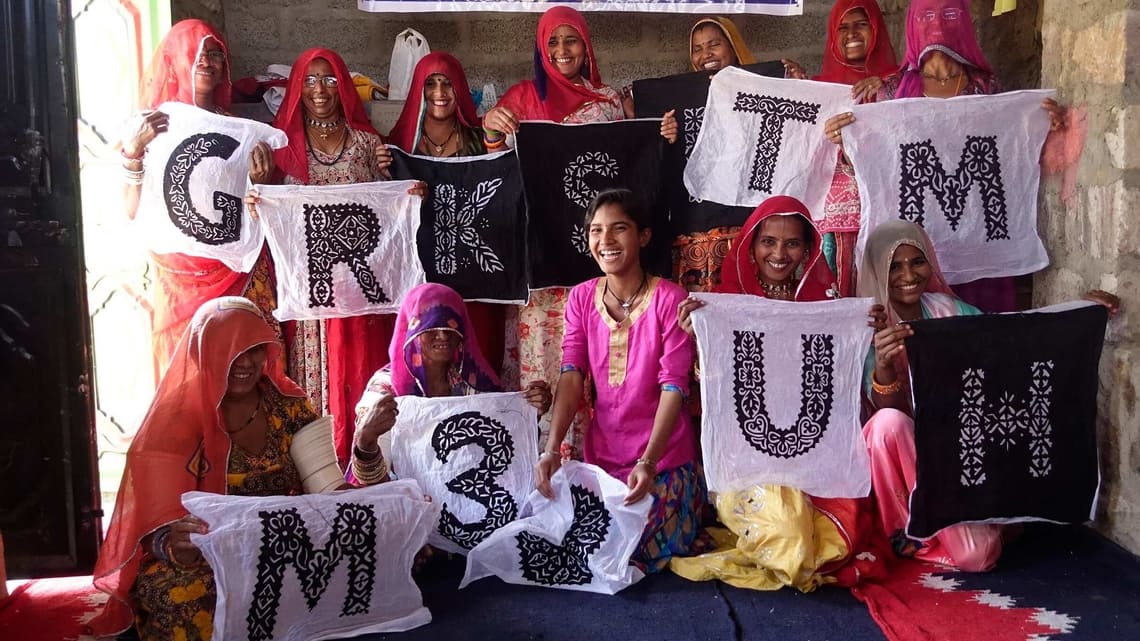 On the website of the Typecraft Initiative, one can see the letter ‘R’ etched in a foliage-rich, botanical typeface. It carries the essence of the vibrant reverse appliqué and patchwork style of the Dhebaria Rabari embroidery practiced in Kutch. This age-old craft has been interpreted as a font in collaboration with five craftswomen, Balli ben, Jeni ben, Seju ben, Parma ben and Dawal ben.

In fact, collaboration is at the heart of what Typecraft does. Founded in 2012 by visual designer and educator Ishan Khosla, in partnership with Andreu Balius and Sol Matas, the project is a one-of-its-kind, creating a digital typeface from a craft or tribal art. As Khosla states, the initiative combines traditional knowledge systems with design and digital technology.

So far, the team has collaborated with craftswomen, who practice Chittara floor art, Godna tribal tattoos, Paakko and Soof embroideries, Madhubani art and the Barmer appliqué and patchwork. They have three type faces available in the market and four more are set to be out. The process of font creation varies from craft to craft, depending on the motifs and the ascribed meanings for each. The latest in the series revolves around the Mithila art from across the Madhubani district of Bihar. However, the work on that is going slow due to the ongoing pandemic. The Typecraft team has made a conscious decision to work only with craftswomen. “When you support women, the whole family benefits,” says Khosla. The idea is not just to provide livelihood but also bridge the gaps between design and craft, rural and urban, mainstream and the subaltern.

The process starts with the Typecraft members researching the craft, the meanings of the motifs, and more. For instance, for the Godna typeface, they tried to understand how tattoos act as markers of identity for the Gond community of Chattisgarh, and also their role in healing diseases. They conducted workshops with the tattoo artists about the kind of pigments used, how the needles clustered and how the tattoos are applied on the skin. The craftswomen and artists are encouraged to make letters on their own using materials like paper, ink and scissors. Special kits are designed for workshops for each craft. The ones for Soof, for example, are different from the Rabari ones, as the former makes use of triangles and waves. The kits feature cutouts of these patterns and craftswomen play with these to create simple and geometric motifs. With no outline offered to guide them, they are free to conceptualise their own designs.

For a lot of the women, using these materials is a novelty, and the initial days are spent in trying to get accustomed to those. “Usually, craftspeople are given patterns by designers, which they then have to execute. We are challenging that. In this process, they have complete ownership over the process as they have to use their creativity to create the designs,” says Khosla. Once they have created the patterns, the Typecraft team adds ‘constraints’ such as height, width and thickness. This leads to a lot of innovation and learning. “For instance, with Paani ben, one of the older craftswomen, we explored different sorts of designs for the soof embroidery based lettering, which we are calling "Soof serifs",” writes Khosla in a paper explaining the process. “We also explored the use of condensed letters, i.e., letters that are narrower in width, as they seem to be more in line with the proportions of soof embroidery.”

A discussion between Ishan Khosla and Sajnu ben, who practices the Dhebaria Rabari embroidery, at her home in Kukadsar village in Kutch, Gujarat. Photo: courtesy Ishan Khosla

Also, the letters, de-contextualised from the motifs they work with, offer a challenge to the artists. It encourages them to think of newer forms that their craft can take. Also, with a majority of the craftswomen being illiterate, the process of making the typefaces motivates them to read and write.

Once the patterns are ready, they are scanned and vectorized, with the Typecraft team checking them for consistency and proportion. According to Khosla, after this, the letters are brought into software like Glyphs to test the functionality of the typeface.

The idea of the project is to challenge the Eurocentric constraints on design. Modernism in design, especially the Bauhaus movement with its minimal aesthetic, banished the lushness of ornamentation. “This had a numbing effect on a country like India. Modernism removed all meaning and function from ornament,” says Khosla, “It’s sad as ornament has a function of organising society, and pride in identity. India is not a less is more country. The motifs in tribal and traditional art are layered, complex and nuanced. And our project is a celebration of that creative spirit.”

The fonts are already being used by designers and publishers. Khosla has also been giving virtual talks about bringing the lineage of ancient crafts into a contemporary context. One such recent talk was with Pavitra Rajaram, brand custodian, Sarmaya, a museum with no boundaries, which focuses on art, artefacts and living traditions. Lauding Khosla’s initiative, Rajaram says, that a project such as this is important in the indian context as it brings out the spirit of collaboration. “Also, in the East, art is the beginning and not the end of creation. It is not meant to be a full stop. Rather, it is a continuum. And through his project, Ishan is taking the conversation forward,” she says.