'Khoya', dry fruits and tender 'jowar' brighten up food stalls in the streets of Gujarat, West Bengal and Uttar Pradesh 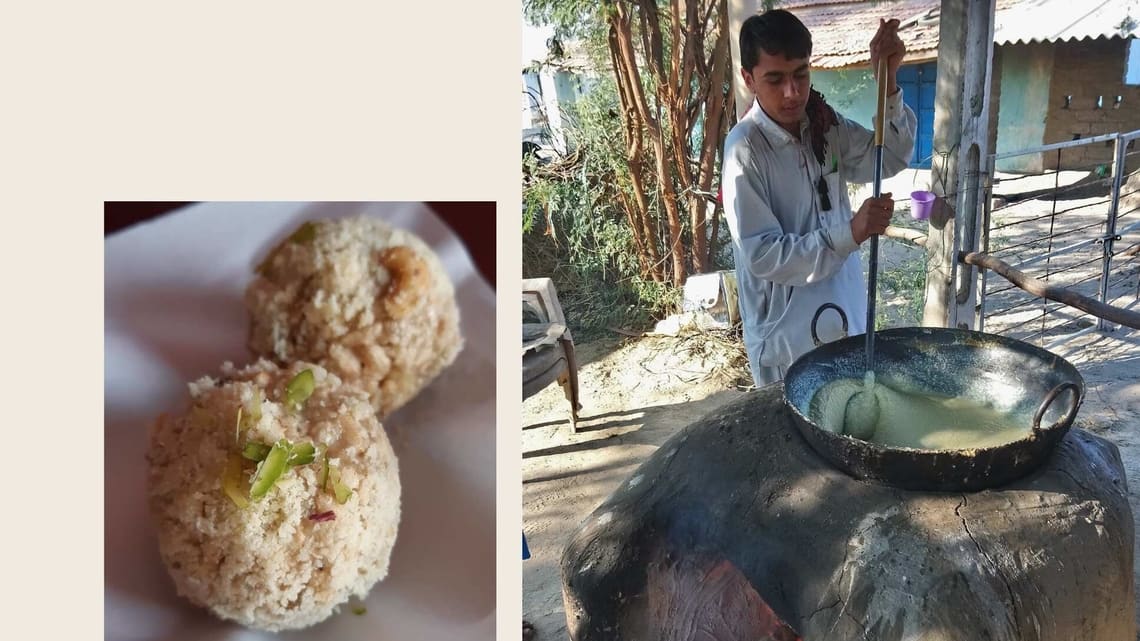 In Lucknow, and most of Uttar Pradesh, street-side carts selling peanuts signal the arrival of winter. Roasted in sand with their shells, these peanuts are sold with salt, with a spicy green chillies and garlic chutney. As the season advances, the streets begin to make space for makkhan malai and black carrot halwa. These may be the more popular street-food items, along with the green peas and green gram kachori of Indore, Madhya Pradesh, and Daulat ki Chaat of Delhi, but there’s no dearth of street food around the country that celebrates both the season as well as the seasonal produce.

Ponkh, also known as tender jowar (sorghum) is Surat’s winter crop, grown mostly in Hazira, a port town bound by the Tapti delta and the Arabian Sea. During winter, a market pops up in the city, with bushels of fresh millet being roasted on coal and pounded to separate the ponkh, which is packed and sold. Shops sell the smoky ponkh as a snack topped with garlic sev and green chutney. You also have ponkh vada and ponkh pattice (deep-fried, with a ponkh filling in mashed potato). The shops serve tea or chaas as an accompaniment.

Get it at: Ponkh Market, near Swami Narayan Mandir, under Sardar Bridge

Carts sell roasted singhara (water chestnut) across Delhi in winter. But in the Kumaon division of Uttarakhand, this seasonal produce takes a different form. Singhara is boiled, peeled, mashed, and then cooked in ghee with lots of ginger, onion and tomato. The kachri is topped with butter and served like chaat.

Get it at: Sunil Kachri, Kashipur; Bablu’s Kachri Live, near the Jim Corbett National Park, Ramnagar

From November, a number of kiosks pop up across West Bengal, serving a sweet snack made with khoi (popped rice) and nolen gur (date palm jaggery). This laddoo-like snack, called mowa, originates from Joynagar, hence the name. “The kiosks selling Joynagar’er mowa are set up by families from Joynagar; these shops are also makeshift homes for these families, says freelance writer and culinary researcher Sibendu Das. “The real mowa, however, is only available in Joynagar in the South 24 Parganas district. The khoi there is made with Kanakchur rice, which has a unique flavour of its own,” he adds. Popped rice is mixed with nolen gur and ghee, with cardamom and poppy seeds added to it. Once cooled, it’s shaped into balls the size of tennis balls. “It’s soft to the bite and yet maintains its round shape without disintegrating,” explains Das. Joynagar’er mowa got the GI, or geographical indication, tag in 2015.

Get it at: Kamala Sweets, Joynagar

In Kutch, when you drive from Bhuj towards Kala Dungar, there’s a small stretch of road lined with shops selling tea, snacks and grocery items. These shops, in Banni’s Bhirandiara village, also sell a specific kind of dairy-based sweet called Banni no mavo. Made by the pastoral Maldhari tribe, the mava (milk solids) is prepared by mixing milk and sugar and cooking it down till the milk acquires a granular texture and light brown colour. The mava is cooked right behind the shops, in an iron wok on wood-fired clay stoves. The tradition of mava-making began in the Banni region before the dairy industry was established, when turning milk into mava was the only way to protect milk from perishing.

Get it at: There are a number of nameless shops, find one that makes the mava right there to ensure you get the freshly made stuff.

Chooda matar, flattened rice or poha cooked with green peas, is Purvanchal’s standard breakfast in winter, when the new crop of paddy is turned into chooda or chevda, and fresh sweet green peas are available in the market. While chooda matar is mostly cooked at home, it’s also a common street-food item in Varanasi. The dish is cooked in ghee, with cashews and raisins.

Get it at: Kashi Chat Bhandar, Varanasi

This winter delicacy is a well-kept secret of the state capital. The main ingredient is sprouted wheat, germinated in the winter dew and cooked with milk, khoya (milk solids) and sugar. A generous amount of spices, like mace, cardamom and nutmeg, are added along with ghee for a rich, warm taste.

Get it at: Rahmat Ali Sweets Corner, Chowk, Lucknow