How Bomras triumphed over the pandemic 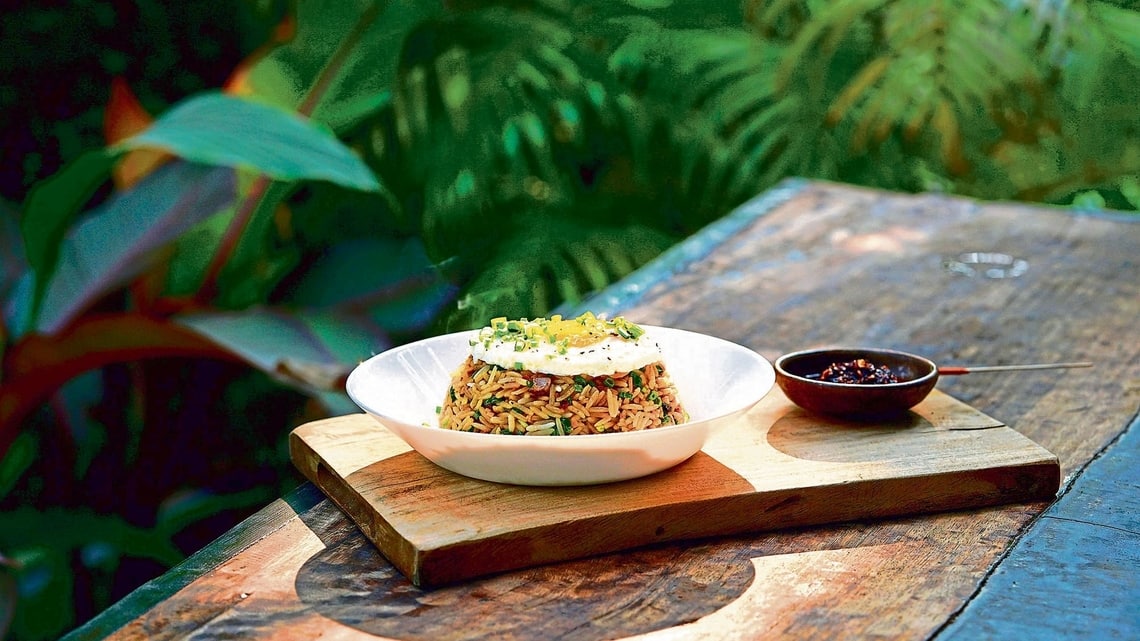 Most people travel to Goa for its beaches. I go to eat at Bomras. I have been to Goa thrice over the past 12 years. Half the meals I have eaten at restaurants in Goa are at Bomras. So when a childhood friend said in February that she was working out of her holiday home there for a month and added that Bomras had moved to a much larger new location in Anjuna, I wasted little time in booking my ticket. My friend’s mother applauded me for overcoming my aversion to flying during the pandemic to visit her daughter. Her daughter was quick to correct her: “He isn’t coming to see me. He is coming to eat at Bomras.”

Indeed, just as in previous pilgrimages, my first meal was at Bomras. On one side was a large kitchen garden growing herbs and leaves such as pandan and an unusual Burmese coriander. On the other, baby banana trees cast shadows on a minimalist white compound wall, looking like art installations.

Chef-restaurateur Bawmra Jap has long taken the edict of using locally grown produce almost to extremes. The Thai galangal, kaffir lime leaves and Sichuan peppers used at his previous location were grown at his home in Goa. In Anjuna, he is in his element. Asked about the unrecognisable green in a chicken and shiitake mushroom dish, Bawmra disappears into the garden for a minute and returns with a sprig of Burmese spiky coriander; he explains that growing it locally is easy because “the weather in Goa is quite similar to South-East Asia’s”. Our smoked pork came with a mix of Javanese mustard greens, Brazilian spinach—both from the garden—and an unusually peppery local rocket (arugula) leaf. Bewitched by how good that rocket was, I asked him about it. He said Goan soil produces rocket with the robustness of bok choy and palak (spinach).

At dinner, we ate everything from wok-tossed beef with chilli to a revelatory dish made from pig’s head but also old favourites, such as his signature Burmese pickled tea leaf salad with broad beans and peanuts, which tasted as if they had been given a new twist. If I lived in Goa, I would be vegetarian for one visit and carnivorous the next: choosing what not to eat at Bomras is otherwise too difficult. On this occasion, I ate so much that I almost needed a vegetable barrow to get to the car.

Partly because Bawmra is based in Goa but largely because he is a free spirit who would likely get indigestion if he had to speak to a public relations agency, the 46-year-old Burmese remains a relatively unsung hero. His cooking is in the league of David Thompson, the Australian chef who has written the bible of Thai cooking, as well as modern Thai eateries such as Bo.lan in Bangkok, whose owners have announced they are closing but will continue with its menu at another location, and Som Saa in London. Both are run by Australians who trained at Thompson’s restaurants.

Also read: Can you adopt Goan susegad as a way of life?

Now, thanks to Bomras’ airy and elegant new location and a team of alumni from The Bombay Canteen, the chef has a setting and a service ethos that matches his genius in the kitchen. Bawmra says finding the location in Anjuna two years ago was “sheer luck”; the Italian owner of a restaurant on the site happened to introduce him to his landlord. The landlord was benevolent enough to start the clock ticking on rent payments only in October last year, a month before the restaurant reopened. Earlier pop-ups by Bawmra at The Bombay Canteen and O Pedro in Mumbai, meanwhile, provided the crucial connections that led to some of their staff migrating to Bomras after the pandemic hammered Mumbai’s restaurant scene last year.

Bomras’ service team is led by Soumil Gharat, who spent almost six years at The Bombay Canteen. Gharat says he had to unlearn the lessons of Mumbai fine-dining, with its relentless focus on promoting new dishes and marketing. “Goa is a place for nostalgia. People coming back to Bomras are also coming back for old favourites such as its tea leaf salad,” says Gharat.

Condiments for khow suey at Bomras.

But the unique training that made conversations with staff at The Bombay Canteen as enjoyable as the food remains very visible. The staff knew the menu backwards and had an easy spontaneity with Bawmra and the guests. When I enquired about the fabled local gins, thimbles of four were brought to the table for an impromptu tasting (Pumori won my vote).

This impressive start notwithstanding, Bomras and other high-end restaurants in Goa and elsewhere face an existential challenge dealt by covid-19’s second wave. Unlike in the US and Europe, where huge government subsidies to pay employees’ salaries have been doled out to this most labour-intensive of industries, employers and employees alike have received little help from New Delhi. The second wave has hit Goa harder; the state had among the highest positivity rates in the country.

Bomras closed on 27 April before there was a directive to do so and is not doing takeaway either. Gharat says he and others moved because of Goa’s perennial ability to attract domestic tourism. “Unfortunately, we are back to square one,” he says.

Before I donned an N-95 mask and a visor for the long wait at Goa airport, which must rank as the ugliest of any major tourist destination in the world, I went for a long lunch at Bomras to make the journey back to Bengaluru in early March seem worthwhile. We ate a delicately spiced crab that almost ranked with those served at the Ministry of Crab in Colombo, Sri Lanka. Bawmra was heading for an afternoon game of the local water volleyball, played entirely in the deep end of a swimming pool, so one must tread water continually. It is hard not to see the demanding sport as an unwitting metaphor for high-end restaurants in Goa as the pandemic drags on.

Before we left, Bawmra described his take on the staple Thai dessert of mango and sticky rice. I am not a fan of the original but Bomras’ version is made by puréeing heaps of pandan leaf and cooking the sticky rice in its juice with palm sugar. When the rice is 80% cooked, sago, coconut milk and white poppy seeds are added before it is baked. It’s that rare pairing, somehow savoury and sweet. I scraped the plate clean. The memory of it will linger until I can make another pilgrimage.

Rahul Jacob was a travel, food and drink editor of the Financial Times.