Only on a Sunday: the prawn ‘pulao’ saga

The pandemic offers fresh impetus to the Sunday family lunch, a period of calm and communion during a troubled, uncertain time, enlivened by a pulao that was once a jinx 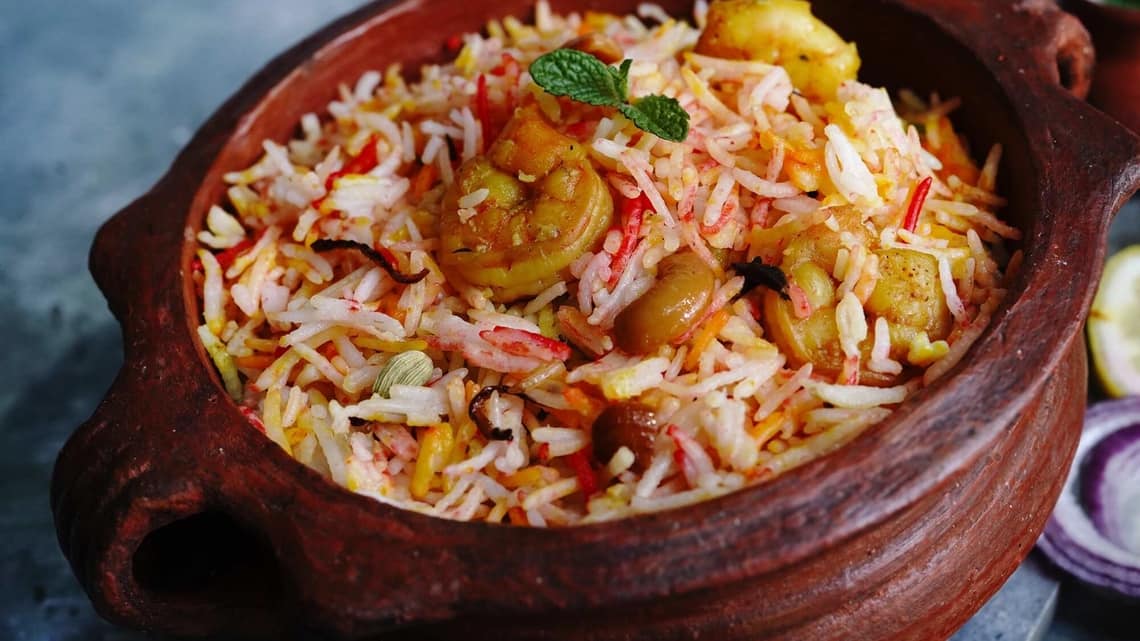 Sometimes, when we don’t want to overthink the lunch thing, we fall back on an old, old favourite: prawn pulao. (Getty)

During the days of my youth, I distinctly remember possessing the ability to sleep until at least 10-11am on Sunday and then looking forward to an expansive lunch. Sleeping until you are hungry and then eating until you are sleepy, as they say.

Those days are, of course, done and dusted. I am grateful these days if I make it to 7am without being roused by the daughter, cat or my own early morning instincts. In the pandemic, there is another reason: The markets shut by 10am, and unless I want to be caught in the last-hour frenzy, it’s best to be there before 8am, shopping bags in hand.

Locked down and locked in we may be but there is something to look forward to on Sundays—lunch. The Sunday lunch has acquired renewed attention at my house, reminiscent of childhood days when it was a time for feasting, communion and family. Somewhere along the way, we fell victim to the Sunday brunch phenomenon, eating out and letting others do the cooking.

Now, there is little choice, and I am happy to report we are all the better for planning and partaking of Sunday lunch. In the Halarnkar family, as my exasperated spouse once noted, we barely finish one meal before we start discussing the next. Sundays are special, so we might discuss the next weekend’s this weekend—you get the idea.

Sometimes, when we don’t want to overthink the lunch thing, we fall back on an old, old favourite: prawn pulao, as handed down by Ajji, my grandmother, to her daughter-in-law, my mother. I do remember the Sunday biryani or mutton curry often being the centrepiece but as red meat restrictions kicked in over the years, the prawn pulao occupied centre stage.

In the days when it alternated with mutton, my mother recalls that Ajji sometimes said it would be best to stop making the prawn pulao because it appeared to jinx Sunday lunch. “Whenever it was made, your father would be called for some emergency,” my mother said. These emergencies included riots, murder or some other trouble that required the attention of the district or divisional police chief, which is what my father was in the years that Ajji lived with us.

Also read: My own food diary

I owe a great culinary debt to both Ajji and my mother but I would like to make special mention of my grandmother, a small, largely illiterate woman imbued with native wisdom and equanimity. I remember her hunched over her book, slowly trying to read and enunciate each word. My brother and I shared a room with her into our early teens, taking for granted her presence and knowledge.

Ajji left us before this century came along but she left behind an enduring culinary legacy. My basic Goan fish curry has for years been inspired by her invisible guiding hand, as has the prawn pulao my mother is now known for. Indeed, until I sat down to write this column, I had forgotten it was not her recipe but Ajji’s. I duly changed it from “Shaila’s prawn pulao” to “Damayanti’s prawn pulao”, which is what you have below.

The prawn pulao is a favourite with anyone who eats it, including the 10-year-old finicky about over-spiced food. The wife, who is vegetarian, roots for it because of its one-pot appeal and simplicity. My mother, no fan of minimal culinary volumes, always overproduces the pulao, which is good because there is enough to distribute.

Also read: Cooking with my mother and other adventures

There is definitely something calming about the entire family sitting down to Sunday lunch these days. With traffic absent, all we hear are songbirds, feuding squirrels and caterwauling cats. We recognise that we are together, healthy and alive—and if the food on the table brings us pleasure, all the better. In these troubled times, that is enough.

2 tsp chilli powder (half for prawns, half for rice)

1 coconut, extract thick and thin coconut milk (Alternative method: Roast sliced medium onion on a griddle until it starts to brown. Add half a grated coconut and roast until both become brown. Grind with some garam masala and water. This is a substitute for the coconut milk)

1 mug (glass) of rice (we use jeera-samba rice), soaked in water

Marinate prawns in half the turmeric and chilli powder and salt and ginger-garlic paste for about 30 minutes. Sauté prawns lightly in a teaspoon of oil in a non-stick pan for five minutes or less. Prawns should only be half-cooked.

In a large wok, heat oil. Add cinnamon and cloves until they swell. Add onion and sauté until pink or translucent. Add the rice and stir in chilli powder, garam masala and half the turmeric. Add prawns and thick coconut milk, mix properly, close lid. After 10 minutes, add thin coconut milk (if you want to avoid the coconut-milk rigmarole, please use alternative method elaborated on in the ingredients list above). If the coconut milk is less, add water so that the rice has enough liquid to cook. Close the lid and let it cook until the rice is done.

Our Daily Bread is a column on easy, inventive cooking. Samar Halarnkar is the author of The Married Man’s Guide To Creative Cooking—And Other Dubious Adventures. @samar11