A Marathwada cookbook sprinkled with memories

If you ask Preeti Deo, she will tell you that some Whatsapp groups can be beneficial. The Maharashtrian, UK-based food blogger is part of a group of 45, which includes her mother, aunts, in-laws and cousins. The focus of the group, called “Age-old Traditional Ways of Cooking", is on spreading knowledge of family cuisine. “We don’t send or receive ‘good morning’ messages, forwards or birthday greetings. Instead, we share pictures of our meals, old recipes, culinary traditions and cooking techniques," she says. “It’s my very own mobile cooking guide".

When the group was formed three years ago, Deo was in the UK, cooking her way through the late Kamalabai Ogale’s cookbook, Ruchira: Selected Maharashtrian Vegetarian Recipes. À la Julie And Julia, she shared this journey on her blog, ISing Cakes, under the section Ruchira Videshini. She took her family’s help to understand the recipes better and figure out alternatives to ingredients not available in the UK. “Doing that experiment piqued my interest in learning about my family cuisine. Ruchira is a general Marathi cookbook but Marathwada has its own unique cuisine because of its geographical conditions. I started observing all the ladies in the family more closely and pestering them to give recipes and share tips," she says.

Last year, Deo lost her mother-in-law to cancer. As a tribute, she decided to write about Marathwada cuisine as passed down in her family. That is how Paat Paani (Authors UpFront, 2018) was born.

The name of the book is a reference to the elaborate process of “setting the meal table". She writes about holidays spent at her ajji’s home in Aurangabad where setting the meal was tasked to the cousins. The boys would arrange the paat (low wooden stools) and the girls would set out the plates, bowls and tumblers. Then they would adorn the area around the pangat (row of seats) with rangoli. The final touch to the rangoli was the addition of the auspicious haldi-kunku (turmeric-vermilion).

Paat Paani is Deo’s way of preserving this and other long-forgotten family traditions, many of which revolve around food. “I want my son to understand our culinary heritage and why we cook a certain way. This book is for him," she adds.

The cookbook has recipes arranged in the order they would appear in a typical thali—starting with pickles/preserves, chutneys, snacks, and moving on to rice, vegetables and dals, breads and desserts. Towards the end, there are chapters that provide an insight into little-known Maharastrian traditions. One of these is about handmade pasta—a staple in Marathi food and eaten steamed, boiled or fried. These are made dry or fresh and include valvat or gavhale (hand-rolled), shevaya (vermicelli shape; hand-rolled or hand-pressed) and kurdaya (hand-pressed roundels). The dry pasta can be made into an upma or kheer; the fresh ones are used in dishes like ukad shengule (pasta in a tempered stock) and varan phala (pasta added to dal). Each family has its own shapes and sizes. 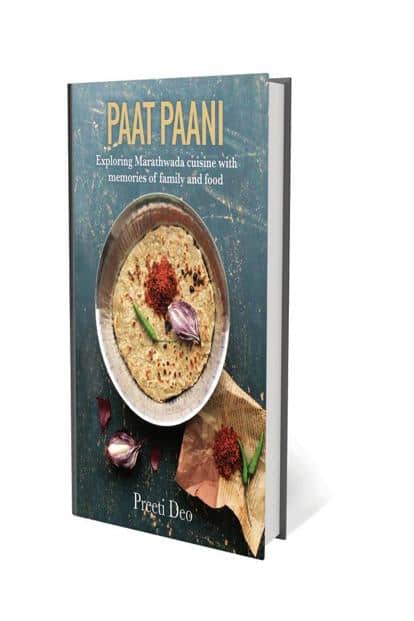 Deo learned much of her pasta-making skills from her mother-in-law. “She was a pro. She could roll two pieces of dough at a time and didn’t require any rolling pins or other equipment to shape them," she says.

In the book, the recipes for these foods are sprinkled with Deo’s memories of the person making them and useful advice gleaned from the Maharastrian kitchen. For instance, Susheela kaku’s (her husband’s aunt) kobichi bhaaji recipe features cabbage, finely chopped and flavoured with red chilli powder and kaala masala (a spice mix unique to each family), which is slow-cooked using paanyache zakaan, a water lid that allows for equal distribution of heat inside the vessel. Her Tai ajji’s lushlushit dhirde (savoury pancake) is made using leftover polya (chapatti) dough, which is dissolved into a thin batter, mixed with asafoetida, chilli powder, turmeric and salt and cooked on the same tawa used to make the polya.

It’s clear that Deo’s book and cooking has been influenced by the many women in her life. “I have taken one unique recipe from each person—aunts, sisters-in-law, cousins, nieces, grandmothers, great mothers-in-law; the rest of them belong to my mother and (late) mother-in-law," she says. The women in question are beautifully depicted in simple black and white illustrations by Sunita Khedekar.

“I owe the book to these phenomenal women," says Deo.