Technological innovations, not a nostalgic return to 'natural' products, can reduce the environmental impact of textiles and clothing 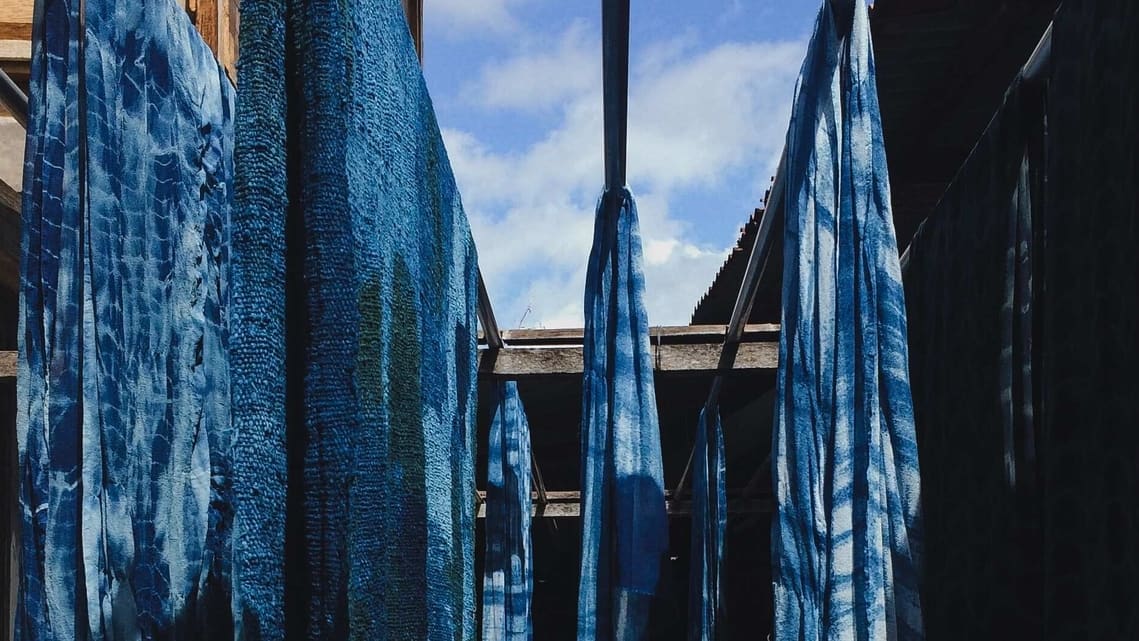 Dyeing fabric has always been a messy process, even when the colours came from plants and animals rather than chemical factories. (Unsplash)

The T-shirt is inky blue and incredibly soft, with drawstrings up the sides to adjust the fit. The indigo sweater is like nothing you’ve ever seen, the texture of its varied stitches enhanced by the wear patterns you usually see on blue jeans. The fabric is silky, with a beautiful drape.

These clothes aren’t for sale — yet. They’re samples, designed by premium-denim pioneer Adriano Goldschmied to fire the imaginations of apparel makers. They demonstrate the possibilities of a new approach to indigo dyeing.

Also read: A trick to break down fashion’s waste problem

Instead of colouring the outside of cotton yarn, the indigo was added during the process of creating Tencel Modal, the eco-friendly cellulose fibre produced by Austria-based Lenzing AG. The yarn was spun from fibre that was already blue.

Such scalable innovations, not one-off art projects or a nostalgic return to “natural” products, are the key to reducing the environmental impact of textiles and apparel. They promise designers greater aesthetic possibilities and producers lower overall costs.

At their best, they’re justified even if you couldn’t care less about the environment. And a good thing, too. The market for hair shirts and sackcloth is limited.

The techniques used to make Goldschmied’s indigo sweater aren’t possible with traditionally dyed yarn. The indigo would rub off and ruin the knitting machines.

“The goal, in the end, is not so much to substitute, but more about adding new segments,” says Goldschmied, who gave the world stone-washed denim. He’s tried many times to make such a sweater using cotton and traditional indigo but, he says, “I’ve never been successful.” With knits displacing woven fabrics, and computer-driven seamless knitting increasingly powerful, the timing is ideal.

Dyeing fabric has always been a messy process, even when the colours came from plants and animals rather than chemical factories. So smelly was the production of woad, the European version of indigo, that Elizabeth I banned it from an eight-mile radius of her palaces. “Natural” doesn’t mean environmentally benign. The difference between now and then is mostly one of scale.

Textiles and apparel are such enormous businesses that reducing their environmental impact even on the margin can have huge aggregate effects. Denim dyeing is a promising place to start. The fabric alone is a nearly $100 billion global industry. Every year, mills consume about 70,000 tonnes of indigo, enough to dye about seven billion garments.

Much of that indigo winds up as waste. First, you dye yarn blue, then weave it into cloth and sew it into clothes. Then you selectively remove the dye to mimic the fading that would occur with wear. This dual process amplifies the environmental effects, since both the dyeing and the distressing traditionally require water and chemicals and produce waste.

“We didn’t realize that we created an eco-disaster in denim,” Goldschmied said in an August 2020 interview, recalling his work in the 1980s and 90s.

“In the beginning, the laser designs looked too one-dimensional,” recalls Gary You, director of strategy and product development at House of Gold, Goldschmied’s Los Angeles-based design and supply-chain agency.

Once graphic designers understood how to use gray-scale to produce the subtle effects the denim industry wanted, the technique spread. Later came a way to use ozone rather than water and bleach to achieve the stone-washed effect. Such techniques not only cut denim’s environmental impacts but also reduce production bottlenecks and improve flexibility.

And they make Lenzing’s new indigo fibre commercially feasible. Unlike traditional indigo-dyed yarn, yarn made from it doesn’t shed colour when rubbed. The extremely small indigo particles are too deeply embedded.

But laser and ozone treatments can selectively remove the colour to achieve the distressed look designers demand. It’s an example of how one set of innovations can open up novel possibilities for a dyestuff dating back more than 6,000 years. Even more radical is what startup Huue is doing: bioengineering yeast to produce the chemical precursors to the beloved blue — not yet commercial but, like the whole field of synthetic biology, enormously promising.

Denim innovations need not be so dramatic to have significant environmental and business advantages. House of Gold is combining treatments and techniques to reduce the time and energy required to get denim to the desired colour — most commonly a medium blue.

Manufacturers usually start with a very dark fabric and repeatedly wash it to reduce the colour. The reason is that starting with a lighter colour doesn’t give the denim the highs and lows designers want. Substituting an ozone wash and a specially dyed denim, House of Gold can cut the time it takes to get to the right colour from 60 minutes to 25, with concomitant reductions in energy and water use.

“We're eliminating like three, four wash cycles,” says You. The appeal isn’t only to the eco-conscious consumer but also to the profit-minded manufacturer. “Their yield is more, too, because you’re producing in less time, more in less time.”

That eye on the audience is critical. If you want publicity, talk up sustainability. If you want to sell manufacturers, emphasize cost savings, flexibility and turnaround time. And if you want to woo consumers, create objects of desire.

“It's no question today that innovation, technology, sustainability are on the stage. In some way, even too much,” says Goldschmied, meaning that designers sometimes forget the core truth that “in the fashion business, you buy a product because you like it.”

It’s an obvious point, but also a profound one. Indigo testifies to its origins in human drives that long predate fashion markets as we know them. For thousands of years, all around the world and in circumstances of great want, people went to enormous lengths to wrest textile colours from nature.

Human beings are not content with purely functional artifacts. They crave beauty and meaning. Those who truly care about the planet, rather than policing other people’s tastes, will work with those desires instead of against them.