The Lakmé Fashion Week (LFW), a biannual event, was held at The St. Regis Mumbai last week. With over 80 designers showing—between the runway and stalls—the five-day event dedicated one day to sustainable fashion, a “crafts is cool" theme lingered, and bridalwear was complemented by experimental compositions. We picked out five lessons from five shows.

Sanjay Garg shows us how to do classic with a twist

Sanjay Garg has established an alternative narrative of Indian luxury with his two labels—Raw Mango, founded in 2009, and his eponymous label, launched in 2014. “I see three visions of India: the kitsch India, the maharaja India and the block-printed, cow-dung India," says Garg. His work is an unfaltering portrayal of the third; austere in form, rich in colour and rooted in tradition. Within those boundaries, Garg has been constantly reinventing himself.

He opened this year’s fashion week with his collection Cloud People. With a total of 65 ensembles, Garg showed saris and flowing gowns, matched organza shirts with lehngas and skirts, and kurtas with shararas and wrap dresses.

The surprise element was the Chikankari work. The 36-stitch relief embroidery work is usually done in floral patterns. A closer look at Garg’s garments reveals motifs like clouds, wings and angels. Garg also makes new material compositions, combining Bengal mul, Zardozi and handwoven brocade. “Indian textiles are the soul of Indian fashion, but we must make different marriages among them: Chikankari with organza, Shibori, and with brocade," he says. Anavila Misra shows us how to go BACK to Black

In the seven years of her practice, Anavila Misra has single handedly popularized the linen sari. But in all these years she has rarely worked with darker colours, “only one charcoal and one black", she says. In sharp contrast to her light, breezy, sunlit pastel colour palette, this season, Misra’s collection of over 50 pieces, Blur, had one common thread: black.

Predominantly saris—also including tunics, kurtas and dresses—the collection is anchored in black and melds into dark olive, bark browns, wine, blue and grey. Apart from exploring a new colour-scape, Misra also goes beyond her staple material, with silk woven into linen in the same garment, “and made on the same loom", with Jamdani in the linen body with a silk border, handblock prints, Batik for some surface texturing, and blends of wool and Khadi. “For the last six years, we’ve experimented with yarns and textures. We’ve understood the textile part of it. The craft cluster I work with has become an expert at it. We now wanted to focus on the design, the apparel, the cuts of the blouses," says Misra.

Why black? “Because black lends itself beautifully to just exploring form and design," says Misra. “Also black is always stuck in the extremities of either formal or sexy. What about the in-between delicate, romantic side of black?" she asks. In emptying her canvas of all colour, Misra has revealed new creative potential.

Pattern on pattern, part drape, part structure, 1970s vintage with futuristic-laser cut appliqués—there’s order in this chaos and it’s called Gen Next. A few shows dedicated to emerging designers unveiled one central idea: A bold expression of individuality trumps all other fashion rules.

Designer Sonal Verma of Rara Avis showed a collection titled Colander that cut up classic silhouettes like trench coats and wrap jackets asymmetrically, and layered faux fur with leather. Collection 10 by Shweta Kapur of 431-88 brought out jackets with power shoulders and pinched waists, in eccentric combinations of jacquard, leather and jersey. “Fashion is a way of communicating who you are. Our generation is not one to hide and drown themselves in loose sacks of cotton shirt dresses. It’s about confidence, regardless of size, shape, age," says Kapur. Manish Arora returned to the LFW after six years, and the runway burst into a profusion of colour and whimsy. Arora, who has been in Paris for the last decade—including a two-season stint as creative director of the French fashion house Paco Rabanne in 2011—celebrated his 10th anniversary of showing at the Paris Fashion Week with his collection Cosmic Love, and showed the same at the LFW. African tribal patterns, Aztec prints, optical art, a peacock-patterned ensemble, Swarovski crystals creating shooting stars on silk dresses, cosmic motifs appliqued on velvet gowns and elaborate head wraps—Cosmic Love stayed true to Arora’s psychedelic, irreverent style.

In celebration of gender-neutral fashion, men walked in heels and carried avant-garde planet and disc shaped clutches. If the collection seems too much of a spectacle, it could be made more wearable by picking out one statement piece—a quilted bomber perhaps, paired with neutrals, and you could spin your own David Bowie (or Ziggy Stardust, if you prefer) avatar. 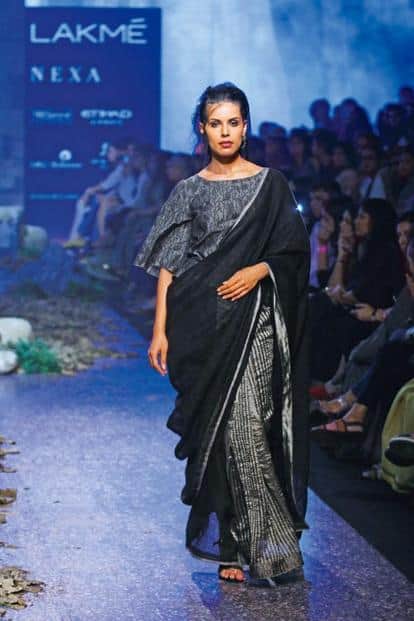 Be conscious of your carbon footprint, says the Huemn Project

In a quieter part of the venue, an art installation and audio-visual presentation brought to light disturbing facts and figures on the impact of the fashion industry on ecology:

“The second largest polluting industry in the world, after oil, is fashion."

“The average woman throws away a fast fashion garment after only seven wears."

“While cotton, especially organic cotton, might seem like a smart choice, it can still take more than 5,000 gallons of water to manufacture just a T-shirt and a pair of jeans."

In Reflection by the Huemn Project, an offshoot of the label Huemn, by designers Pranav Misra and Shyma Shetty, the installation of human bodies wrapped in shreds of clothing and plastic bags resembled a landfill of fashion-bodies. Misra and Shetty collaborated with other designers—Bodice, Dhruv Kapoor, Munkee See Munkee Doo, Kanika Goyal, Ilk Drvv, AntarAgni and Ikai by Ragini Ahuja—and sourced fashion-waste from their ateliers to create 10 “recycled" ensembles. “We keep reading these worrying statistics and considering we, as designers, drive this consumerist culture, it’s important for us to create a dialogue around this," says Shetty.

While the installation drove home the point most viscerally, the thread of fashion consciousness ran across a lot of shows. IMG Reliance held a show titled Restart Fashion, featuring designers who specifically work with post-consumer waste fabric like Chola and Doodlage. UK-based fashion activist organization Fashion Revolution took the opportunity to reveal the chain reactions and consumerism fuelling the fashion industry. “We were formed as a response to the tragic Rana Plaza disaster (garment factory collapse in 2013) when we lost over 1,138 people in Bangladesh, Dhaka," says Suki Dusanj, the India coordinator. Addressing concerns of fair wages, safe working conditions, resources used in manufacturing, and waste disposal, sustainability was taken beyond the buzzword it has become.