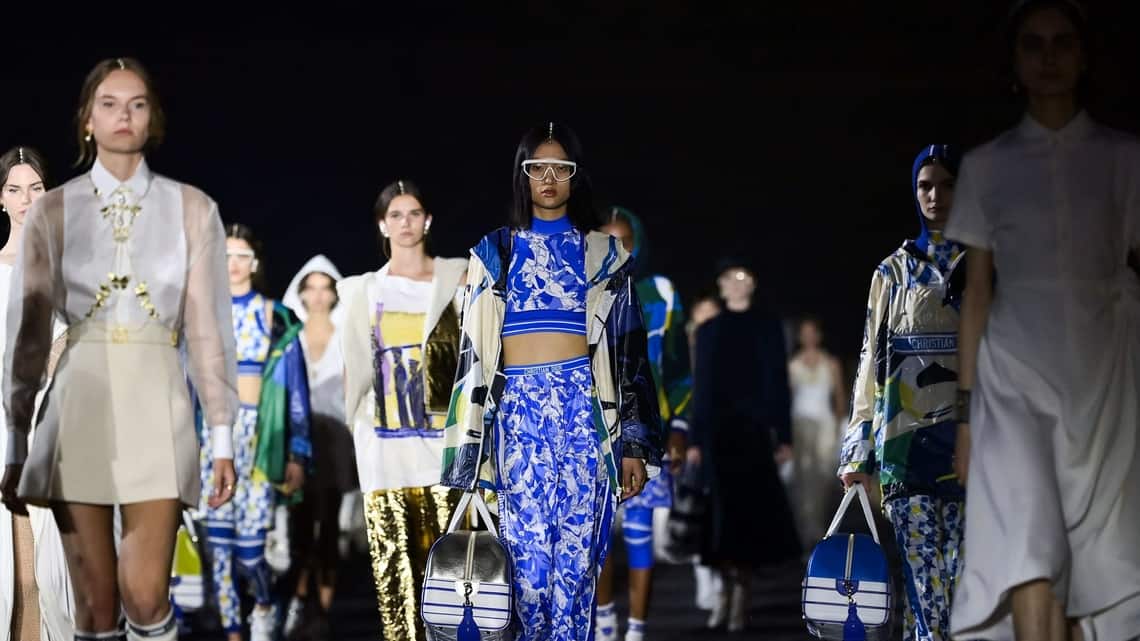 Models present creations for Dior during the 2022 Dior Croisiere (Cruise) fashion show, at the Panathenaic Stadium, in Athens, on 17 June. (AFP)

French fashion house Dior returned to live audience shows with a firework-punctuated presentation of its 2022 Cruise collection in Athens at the Panathenaic stadium, site of the first modern Olympic Games.

Greek artisans whose work was featured in the collection, presented on 17 June, included a tailor and embroiderer from Argos in the Peloponnese, a silk factory in the northeastern town of Soufli, and a maker of fisherman's caps from the port of Piraeus.

"I am very interested in the craftmanship. It's my passion," Dior creative director Maria Grazia Chiuri told AFP.

"Each country has many different aspects in fashion," she said.

Cruise collections fall between usual spring/summer and autumn/winter collections, and French houses often visit other countries for the launch.

The event in Athens "(blends) the power of heritage and contemporary inventiveness," Dior said.

The peplos, the robe traditionally worn by women in ancient Greece, was a "key inspiration" for the show's tunics, the fashion house said.

The show took place 70 years after an iconic Dior shoot at the Acropolis.

"We are very proud to be here," Chiuri said.

"When I arrived in Dior I found the archive and I said, one day it would be great to realise again this trip in Greece. In some ways, it's an anniversary," she said.

In addition to the Acropolis, Greek officials have permitted Dior photo shoots at the Odeon of Herodes Atticus, the Ancient Agora in Athens, the temple of Poseidon at Sounio and the temple of Zeus at Nemea.

Chiuri said getting crowds back was a welcome feeling. The last show with spectators, a smaller affair, was in September.

"We worked a lot with video, film, but it's completely different to have an audience at our fashion show. It's like a concert," she said.

"The guests are part of the show with us."